The Top Emojis of Ramadan: A Global Analysis 🌙🙏🏽❤️

Emojis have been called the world’s fastest growing language. Yet remarkably little research has been done on differences in emoji usage between cultures. Previous analysis has usually focused on aggregate differences between countries based on data from third party keyboard apps. Here, we analyze emojis in nearly 35,000 tweets in nine languages about a common topic: the Islamic holy month of Ramadan, which began this past weekend. In doing so, we see broad commonalities across languages but also noteworthy and meaningful differences.

We used the Twitter Search API to collect tweets mentioning #Ramadan or رمضان# from May 27-28, 2017, the first two days of Ramadan. Since Twitter automatically detects tweet language and allows for tweet search by language, we were able to obtain tweets from around the world in nine languages: English, Arabic, Urdu, Farsi, Indonesian, Turkish, French, German, and Spanish.

A universal language for a 🌍 celebration, with local variation as well

Previous research has found that the majority of emoji usage, in general, consists of faces and hearts. Our Ramadan dataset largely replicates this pattern. We also observe some interesting and novel findings when we look at the top 10 most commonly used emojis in each language (presented in descending order in the above graphic):

The long tail of emoji usage 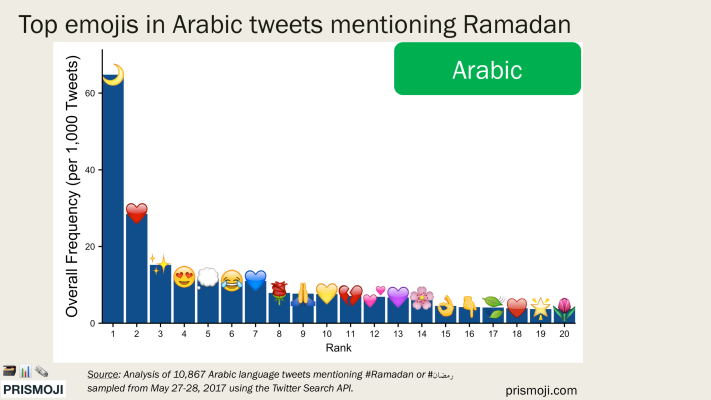 One of the fascinating aspects of emoji data science is the degree to which a small set of emojis dominate emoji usage. We see this in our Ramadan dataset as well, where above, we plot the frequency of the top 20 emojis, separately for English and Arabic language tweets. We see the long tail at work, where in English language tweets, frequency falls steeply after the top three emojis (❤️, 🌙, & 🙏), while in Arabic, the top emoji (🌙) is used more than twice as often as the second most common emoji (❤️), after which usage for the remaining emojis level off.

Here are the top 20 emojis for the remaining languages in our dataset:

We can also compare the top 20 emojis used in English vs. Arabic tweets. We see that in both languages, hearts are the most frequently appearing emojis, comprising seven of the top 20 for both English and Arabic. However, the top 20 emojis in English include six faces and five hand gestures, while Arabic only has two faces and three hand gestures. Instead, Arabic includes five plant and flower emojis, which might indicate greater closeness to nature and less emphasis on face emojis used to represent one’s own feelings.

Is there a more robust way of comparing emoji usage between two mutually exclusive subsets of the Ramadan dataset? There is, indeed. Just as in our previous work, where we compared emoji usage in tweets mentioning Kanye West vs. Taylor Swift and Donald Trump vs. Hillary Clinton, we can compute odds ratios for each emoji between two different sets of languages and represent the results in a two dimensional ✈️.

In the above plot, for simplicity, we take the naive approach of grouping Western languages on the one hand – English, French, German, and Spanish – and non-Western languages on the other hand – Arabic, Farsi, Indonesian, Turkish, and Urdu. (Since the greatest sample of tweets is from English and Arabic, they exert a disproportionate amount of influence on the final plot.)

Finally, we have one more way of comparing frequency of 🙏 and 🌙 across languages. Above, we see a pattern slightly more nuanced than the division of languages into Western and non-Western. French has the highest usage of 🙏, but it’s closely followed by Indonesian and Turkish. Meanwhile, Arabic and Farsi have minimal usage of 🙏 and Urdu has literally no usage of 🙏 at all in our admittedly modest sample of tweets about Ramadan. We also see 🌙 most heavily used in Arabic tweets, followed by Turkish tweets.

The meaning of 🙏 remains highly contentious in certain parts of the internet, with vocal factions continuing to maintain that it actually means “please” or “thank you” and has only minimal religious connotations. A source no less authoritative than Emojipedia maintains to this day that the emoji represents “two hands placed firmly together, meaning please or thank you in Japanese culture.”

Regardless of how the emoji was originally intended to be used, in the context of tweets about Ramadan, 🙏 almost always refers to prayer or more abstractly to Islamic religious or spiritual practices.

Here are some illustrative examples from English language tweets in our dataset:

Day one wasn’t the easiest. iA tomorrow will be better 🌙🙏🏼 #Ramadan https://t.co/Sjs4usNT36

Ramadan and exams 😞😞
May allah bless us 🙏🙏#Ramadan

May allah guide us to be a better person this Ramadhan, I wish you all a blessed holy month🙏🏻 #رمضان

We also find tweets in Arabic with explicit Islamic prayers appended with 🙏, for example:

What about French, the language that uses 🙏 the most? We observe the same type of usage:

The late Portuguese writer and Nobel laureate Jose Saramago has a piercing quote about the power of language in one of his books. While The Double was written in 2002, and hence predates emojis, Saramago’s insightful words seem deeply prescient in the modern age:

We have an odd relationship with words. We learn a few when we are small, throughout our lives we collect others through education, conversation, our contact with books, and yet, in comparison, there are only a tiny number about whose meaning, sense, and denotation we would have absolutely no doubts if, one day, we were to ask ourselves seriously what they meant. Thus we affirm and deny, thus we convince and are convinced, thus we argue, deduce, and conclude, wandering fearlessly over the surface of concepts about which we have only the vaguest of ideas, and, despite the false air of confidence that we generally affect as we feel our way along the road in the verbal darkness, we manage, more or less, to understand each other and even, sometimes, to find each other.

In comparison to words, emojis are on the one hand, more universal, yet on the other hand, infinitely more nuanced. Since we use them mostly in interpersonal communications (either when texting friends or while posting on social media), the prevalence of filter bubbles means we may never know what an emoji objectively means in the broader world outside of our personal social networks.

Unlike words, which we learn in university and from books and authoritative sources such as newspapers, we learn emojis in the real world. The risk of meaning being lost in translation is much greater but the intimacy is also greater as well since we ourselves give meaning to, and find meaning in, emojis.

Our analysis of tweets from the opening weekend of Ramadan in nine languages shows us that order can emerge from chaos when it comes to emoji usage. There is tremendous commonality in the emojis we use to talk about Ramadan, whether in Arabic, Urdu, Spanish, English, French, or the four other languages we evaluated.

Nevertheless, meaningful differences also emerge in emoji usage and better understanding these differences may be a major 🔑 that allows us to make sense of the effect of technology on communication, the evolution of language over time, and eventually, each other.

* A NOTE ON METHODOLOGY: The above analysis relies on an older emoji unicode dictionary that doesn’t include some of the latest emojis that may also be found in Ramadan related tweets, namely 🕋 (kaaba), 🕌  (mosque), or 📿 (prayer beads). For more information on our general methodology, check out our recently released tutorial on Emoji Data Science in R. You can also watch my talk on PRISMOJI and emoji data science at CSV Conference in Portland last month here. If you’d like to contribute to open source emoji data science research, say hi at hello@prismoji.com 🙂